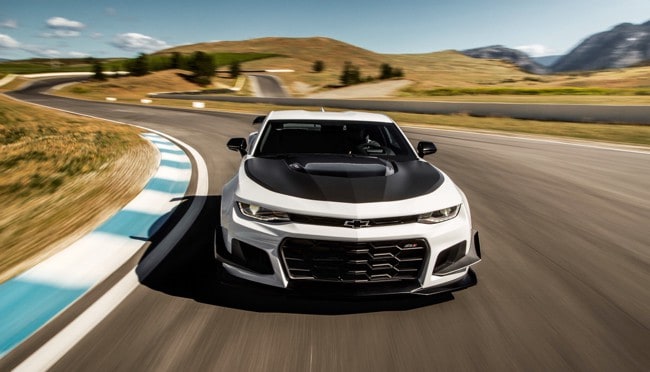 An automotive manufacturer spends serious time and resources on developing the new evolution of an iconic badge, so they do all they can to make sure everything goes as planned. Until their new wheels are directly in the hands of their consumers it can be challenging to know if the brand hit the mark. When the Camaro team decided to do a media launch to introduce the new ZL1 1LE to their market, they chose Area 27. And what an introduction it was.

“It was outstanding”, says Al Oppenheiser, Camaro Chief Engineer. Oppenheiser leads the Camaro product line, from engineering and manufacturing to marketing and sales. It’s a large responsibility to hold  in your hands the legacy of a vehicle with such a pedigree. “We’re the gatekeepers for this period of time with Camaro.” He carries the weight of future promise and relies on his team to help him deliver. So they test their ideas. They do a lot of testing.

The Chevrolet proving grounds is a private test circuit that those in the know lovingly call “MRC” (it’s a secret we promised to keep). Part road course and part torture track, its only purpose is to put new cars through their paces out of the public eye. “We don’t have media there”, says Oppenheiser. “As it is we’re constantly battling drones. It’s not easy.” Then someone made the Area 27 connection. “We weren’t sure what to expect, as it’s a new track. So we sent someone to check it out.”

Enter Ron Kiino with Chevrolet Communications – Performance Cars division. Kiino made the trek from head office in Detroit to Oliver, British Columbia, and saw something that reminded him of MRC. “What was in front of him looked pretty familiar”, says Oppenheiser. “A track that’s almost three miles with significant elevation changes, challenging corners, a long straight. It felt so much like our MRC. We couldn’t have asked for a better fit.”

Most manufacturer product launches happen at a recognized and well-known public track with plenty of national media who are already well aware of the circuit. Bringing national media to parts unknown was a bit of a gamble for the Camaro team. “We didn’t know if media would want to come this far”, says Oppenheiser. “Turns out it was the best secret hook. When they arrived at Area 27 they were all wide-eyed. We had to act like we weren’t impressed with the track.” Oppenheiser laughs. “That was the hardest part. We were all excited to be there but had to play it cool in front of the press.”

The fit went beyond the similarities between the Chevrolet testing grounds and our track. Here, the 2018 Camaro ZL1 1LE proved its mettle for both the production team and media. “We wanted a course with challenging corners to push the suspension, hairpin turns to highlight braking capabilities, a straightaway to open the engine, and somewhere that could show off downforce and aerodynamics.” Oppenheiser pauses. “I realized Area 27 does it all in one track.”

Academy 27 instructors helped Camaro’s team familiarize themselves with the circuit before introducing media. “We got some good speed on that straight”, says Oppenheiser. “Up to 135 – 140 mph (217 – 225 km/hr). And I absolutely love the turn 6-7 area.” He goes into technical detail about compression on the suspension as the ZL1 1LE climbs through turn 6 up into 7 before turning down into 8 and up through 9 into a blind apex. “The aerodymanics on the rear wing, really, the technical pieces of this track really shows what our Camaro is capable of. The team of Academy 27 instructors is great.”

Oppenheiser has the chance to be on some of the world’s best circuits in some of the highest performing cars. “We’ve been to the top tracks in the world. They all have strengths and weaknesses. Except Nürburgring. We call that the Final Exam.” Of course the ZL1 1LE performed true to form there, too. After spending almost a week at our track Oppenheiser has added it to his Best Of list. “It rates up there with the best”, he says. “Reminds me a bit of Virginia International Raceway in that it’s technical with high speed areas. Really, Area 27 is one of the best tracks we’ve ever seen in North America.”

It’s one thing to have proof that the newest iteration of Camaro hits all the right marks on the track, and another to know it resonates with your target market. “We designed and built the ZL1 1LE with a certain customer in mind”, explains Oppenheiser. “Our target was a motorsport enthusiast with some track time under their belt, or interest in track days. Someone who was a member of a private track with a moderate amount of experience.”

When a few Area 27 members came by to see what all the fuss was about, the Chief Engineer had his proudest moment. “I felt bad taking track days away from the members”, he says. “So when I heard we could invite some to check out the car, I thought it would be great to give them a taste of it. I spent some time with them.” Oppenheiser laughs again. “Yeah, we definitely hit the target with the ZL1 1LE. We traded a vision for a car that delivers. Their smiles said it all.”

We’re pretty proud over here too, Al. Thanks to you and the Chevrolet team for trusting our track to show off the new 2018 Camaro ZL1 1LE. Looks like the media lapped it up. As gatekeepers, you did good.

“It loves sure, strong inputs and surprises with its ability to hang tough around a full lap of the tricky, testing and absorbing Area 27 private track in Canada.” BBC Top Gear

“Chevrolet let us chase as many laps as we needed to get up to speed in the 1LE.” Road & Track

“It’s long – 3.1 miles – and technical enough to load up the 1LE and toss it around a bit.” Autoblog

“Through Area 27’s variety of challenging corners, other aspects of the ZL1 1LE come into focus.” CNET